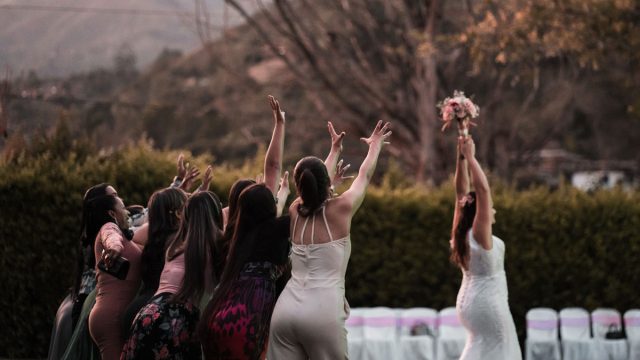 You may love it or hate it, but the long-standing bouquet toss custom remains a staple of wedding receptions.

You’ve likely seen the tradition in action numerous times and may have even taken part in it. Now, it’s your turn to be the thrower.

If you aren’t yet sure you want to incorporate the custom into your wedding, you may wonder whether throwing the bouquet is necessary, how did the tradition originate, and who keeps the bouquet.

The truth is, bouquet toss is one of the oldest wedding traditions. It has morphed over the centuries and acquired an entirely different meaning.

There’s no right or wrong answer to whether you need to observe the tradition. Bouquet toss brings energy to the reception, but it also has several drawbacks you need to consider.

In pagan times, wedding flowers represented fertility and were believed to bring luck. Ancient Roman and Greek brides carried bouquets of aromatic herbs to ward off evil spirits. However, they didn’t throw their flowers into the crowd.

The history of the bouquet toss tradition dates to 19th century England. Women at that time believed that touching the bride on her wedding day would bring them good luck.

Single girls would often crowd the bride, hugging and rubbing her, hoping that her fortune would stick to them and they would soon get married. Of course, such attention often caused discomfort to the bride and felt like an invasion of privacy.

According to legends, some women even went as far as to rip a piece off the bride’s wedding dress or steal her keepsake. The bride would then toss the bouquet to single women to escape and preserve her attire.

Nowadays, ripping off pieces of the bride’s dress may seem unrealistic. However, marriage was the only way for a woman to improve her social status back in the day.

Many were desperate to change their lives by finding a man to provide for them and their families.

Societal norms have evolved throughout the centuries, and women don’t need to be lucky to get married anymore.

Over time, the tradition morphed into a fun competition between the bride’s single friends rather than a desperate attempt to get married.

Who Participates in Bouquet Toss?

Since the bouquet toss superstition states that a woman who catches the flowers will soon get married, only single ladies participate in the contest.

The tradition has no age limit. If your grandmother is single and open to a new relationship, she’s free to participate, although some brides only invite their young friends who have never been married.

Note that no one should force single women to participate if they aren’t comfortable with it. Many women find the tradition outdated or feel awkward being in the spotlight. Furthermore, everyone has a different attitude towards being single.

For example, you may invite everyone at the wedding to participate and toss the bouquet as a sign of luck rather than soon marriage. Or, you may throw something entirely different, like candies or an item from your wedding theme.

Even if you opt for a traditional bouquet toss, you may let bachelors participate along with single women. Firstly, this makes the event less awkward for the ladies. Secondly, men may want to get married, too.

Lastly, the bouquet toss is better than the garter toss. The groom must take a garter off the bride’s leg and throw it to single men while the bride’s parents are watching – no, thank you. Combining the traditions is a better idea.

Most importantly, everyone should consent. You may ask your friends about their attitude towards the tradition before the wedding to avoid uncomfortable moments during the reception.

Read more about Wedding Tradition: Garter Toss, How Long Is A Catholic Wedding, Bouquet Toss Alternatives, Wedding Superstition, and Most Popular Month To Get Married.

When Does The Bouquet Toss Occur?

There’s no set rule as to when the bouquet toss should occur. Typically, the bride throws her bouquet when the reception comes to an end after the wedding cake has been cut and the couple had their final dance.

However, the bride can decide to toss her bouquet earlier, in the mid-reception when the fun is at its peak, or right after the ceremony.

How Long Is The Bouquet Toss?

The bouquet toss usually takes only a couple of minutes, with most of the time dedicated to gathering all the single ladies on the dancefloor.

The DJ usually announces that the bouquet toss will happen soon in advance to ensure that all single ladies are informed and present when it takes place.

When the bouquet toss time arrives, the DJ turns on a song selected by the bride, and all participants come to the dancefloor.

Does The Bride Have to Toss The Bouquet?

The bride is by no means obliged to toss her wedding bouquet. In fact, the reasons against bouquet toss outweigh the reasons in favor of the tradition. It’s only fun if everyone takes it lightheartedly and is extraverted enough.

The wedding bouquet toss tradition isn’t as awkward as the garter toss – at least you aren’t throwing a piece of your lingerie. Still, many guests, even those not participating but watching the process, find it extremely uncomfortable.

There’s nothing wrong with being single, and some women actually enjoy it. Being called to the dancefloor solely because of one’s relationship status doesn’t seem right to many people.

It’s also best to avoid the tradition if only a couple of single women are at your wedding. Generally, the more women participate in the event, the more fun it is. Being the only one catching the bouquet is a nightmare coming alive.

If your single friends’ cringe isn’t your primary concern, or you’re sure they’ll be excited to participate, think about the practical aspects. Firstly, the tradition can be dangerous.

While getting a black eye from a bouquet may seem unlikely, accidents happen more often than you can imagine.

Secondly, most brides prefer not to throw their own bouquet because it carries sentimental value. However, paying a lot of money for a second bouquet only to throw it is wasteful.

Despite all the pitfalls of the bouquet toss tradition, there’s no harm in observing it if you find it fun and perceive it as a way to get your friends moving again after eating the cake.

Where is The Tradition Observed?

The wedding bouquet toss tradition is widespread. Couples in the U.S., South America, Russia, and all parts of Europe observe it at both traditional and modern weddings.

However, the popularity of bridal bouquet toss is rapidly decreasing. According to surveys, about 35% of modern brides consider the tradition outdated, while 65% plan to toss their bouquets.

Nowadays, many couples opt for creative bouquet toss alternatives that are more meaningful and inclusive. For example, some brides pass their bouquet to the oldest couple at the wedding as a sign of respect.

Muslims don’t observe the custom because believing that a bouquet may have such power goes against Islamic teachings. Chinese and Japanese brides also don’t throw their bouquets.

Who Keeps The Bouquet After The Toss?

Many brides wonder who keeps the bouquet after the toss. Bridal bouquets tend to be expensive, beautiful, and symbolically significant, so women rarely want to give theirs away.

Traditionally, the bouquet remains with the woman who caught it. For brides who don’t want to preserve the bouquet as a keepsake, the tradition is an elegant way to get rid of the flowers.

On the other hand, some women find throwing their floral arrangement a sacrilege. In this case, the bride may order a second wedding bouquet for throwing.

Do You Need a Second Bouquet?

The second bridal bouquet is typically a simpler version of the real one. It can feature the same colors but cheaper flowers or be smaller.

Some brides order breakaway bouquets for tossing. Such arrangements consist of multiple small bouquets, but the competition participants don’t know about it until the arrangement breaks down in the air.

This way, everyone gets a piece of the bouquet. It’s an original way to show that your friends deserve love equally.

Even a tiny wedding bouquet will cost you about $50-$85. Breakaway bouquets are usually large and cost more, so if you’re willing to make a statement, be prepared to invest extra money.

At the end of the day, you don’t have to toss a bouquet. According to the tradition, any bride’s wedding attire element brings luck, so you can throw the veil, handkerchief, or anything else.

You can get creative with your giveaway and align it with your wedding theme – for instance, throw a Christmas tree ornament if you have a winter wonderland-themed wedding or a gift card if you’re a practical person.

Recommended Articles
Garter Toss Tradition Explained (And Its Origins)Who Walks The Bride Down The Aisle? (Not Always Her Father)
Hello, I'm Kate

Welcome to Bridilly. I have two passions in life: happy brides and beautiful weddings. I share all my tips, tricks, and inspiration on this website, as a professional wedding planner.
Topics
Recent Articles
»