What Is a Bridal Shower? Everything You Need To Know 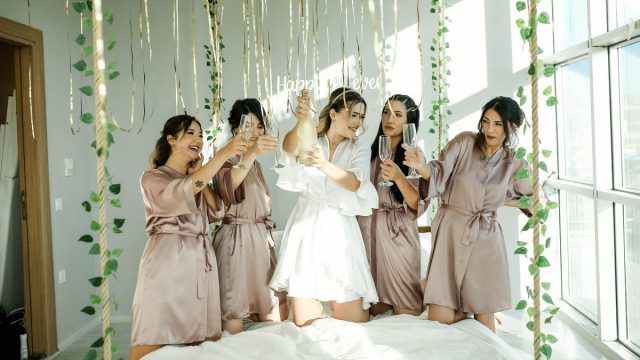 Wedding celebrations start long before the big day, and the bridal shower is one of the significant events on the timeline. But what is a bridal shower?

Some people consider bridal showers a modern invention and just another unnecessary party.

However, the history of bridal showers dates back centuries. This event has a deep symbolic significance and practical purpose.

Although the customs have morphed over time and the initial event’s purpose was somewhat lost, the bridal party remains an important day for many brides in the U.S.

Whether you’re the bride, the maid of honor, the bride’s mother, or the party guest, knowing the bridal shower etiquette is crucial.

What’s the Purpose of a Bridal Shower?

With all the celebrations sprinkled along the wedding planning timeline, many people wonder what’s the purpose of a bridal shower. Simply put, a bridal shower is dedicated to celebrating the bride with her upcoming wedding.

Unlike bachelorette parties, bridal showers are meant to prepare the bride for her future married life rather than to enjoy the last days of freedom and relieve stress.

And unlike engagement parties, bridal showers focus on the upcoming wedding rather than celebrating the fact of engagement.

The bridal shower history started in 16th century Holland. The event initially served as an alternative to a dowry system.

The bride’s friends and family members used to gather and give her small favors to start a new married life. The practice was customary among the lower classes or when the bride’s parents were against her match and refused a dowry.

The tradition arrived in the U.S. during Victorian Era, but the meaning behind bridal showers has slightly changed. During that time, modern bridal shower etiquette was established.

American ladies from the upper classes adopted the tradition and used bridal showers to gossip and exchange gifts and tips about married life without the intent of collecting dowry. The bride usually received simple yet practical home goods.

Is a Bridal Shower Mandatory?

A bridal shower is by no means mandatory. If the bride doesn’t want a bridal shower, she’s free to refrain from it. Many women consider so many celebrations (engagement, bridal, and bachelorette parties) unnecessary.

There’s no set rule stating that any celebration is necessary before the actual wedding. However, bridal showers are typically fun, lighthearted events, so why say “no” to another reason to throw a party?

Who Hosts the Bridal Shower?

Traditionally, the mother of the bride or her maid of honor plans and hosts the bridal shower. Other family members, typically women, can also chip in and help in planning, decoration, and other organizational moments, but this isn’t mandatory.

The reason bridal showers are so woman-centered lies in their history – as you already know, the initial purpose was to collect dowry but also share helpful marriage advice among women.

Nowadays, the event isn’t as gender-focused. Bridal showers are more and more often hosted by the bride’s best male friend or brother. Her uncles, father, and other male family members can also participate in the planning.

Most importantly, the bridal shower is the responsibility of someone close to the bride, whether it’s only one person or a large group. However, sometimes, bridal showers are organized by the groom’s mother as a sign of acceptance into the family.

With so many bridal shower host options, communication among the bride’s close ones is vital to ensure they aren’t hosting two parties.

Sometimes, the bridal shower is a surprise. But usually, the bride is aware of the party planning and is involved in it to some extent.

The bridal shower host may ask the bride about her preferred themes, activities, food, location, and date. Some brides even decide to chip in.

Same as with the bridal shower host, there are no strict rules regarding the guest list. Customarily, bridal showers were women-focused events attended by the bride’s female family members and friends, but those times are long gone.

Nowadays, the bridal shower’s host can invite anyone close to the bride, be it her bridesmaids, male friends, father, brother, uncle, or grandmother.

The guest list is traditionally limited to people from the bride’s side and the groom’s female family members, like his mother, sisters, and grandmothers.

If the party involves the groom’s friends, colleagues, or extended family members, it’s considered a wedding shower and is an entirely different event. Of course, this doesn’t apply to people who are close to both the bride and the groom.

One of the most critical bridal shower etiquette points is to only invite people who are invited to the wedding to avoid drama.

Usually, the bridal shower guest list is relatively small, but this depends on the budget and the bride’s preference. If the bridal shower is a surprise, the hosts should work together to ensure no one of her close ones is left out.

The bridal shower is dedicated to the celebration of the bride’s upcoming wedding rather than engagement, so it’s traditionally held no long before the big day. Three months to three weeks is the optimal time.

Considering the bride’s plans and guests is vital when selecting the celebration date. If many guests live out of town, the hosts should give them more advanced notice.

The hosts should also ask the bride about her wedding dress shopping, cake tasting, and other scheduled events – brides tend to be very busy during wedding planning, especially in the last three weeks before the big day.

Communicating with the bridesmaids is always a good idea. The hosts should ensure the bridal shower and bachelorette party don’t collide.

However, if many guests will travel from other towns, hosting both parties on the same weekend may be a smart solution.

As a rule of thumb, the hosts send out the invitations four to six weeks before the party. Invitations sent by post are a traditional choice, but e-mails are undoubtedly handier and won’t get delayed along the way (but be mindful of the spam folder).

Where Is the Bridal Shower Held?

The short answer to “where is the bridal shower held?” is – anywhere. The bride’s hometown is an excellent choice if she and her close family still live close.

When choosing the location, consider the bride and guest residences. If the bride lives out of state and all the guests live close to each other, asking the bride to travel may be better.

The bridal shower location largely depends on the budget and the bride’s preferences. It could be a restaurant, beach, backyard, or anything else.

A destination bridal shower is an excellent option if you have the budget and the guests don’t mind traveling.

What to Do at a Bridal Shower

Historically, bridal showers were about giving gifts and advice to the bride. This hasn’t changed – modern bridal showers also revolve around preparing the bride for her married life.

Of course, like any party, the bridal shower also involves food. Drinks are optional because bridal showers are typically daytime events attended by people of all ages, including children and the elderly.

The host may also come up with additional entertainment depending on the bride’s preferences, location, budget, and guest list. It can be games, wine tasting, designing wedding dresses, a group photoshoot, sports, or virtually anything else.

Most importantly, ensure everyone on the guest list can participate. Don’t choose wine tasting if the bride’s underage sister will be present, and don’t choose extreme sports if you’ve invited the bride’s grandmother.

There’s no set bridal shower dress code – it depends on the location and activities. Smart casual attire is a versatile choice. Bridal showers are usually daytime events, but it’s still a celebration, so leggings and sneakers may be inappropriate.

Of course, if you plan to go camping, a tracksuit is better than a white shirt and heels, and a luxurious restaurant requires a cocktail dress. The best practice is to indicate the dress code on the invitations.

Sometimes, bridal showers have a theme, which should also be mentioned in the invitations. Retro, Art Deco, tropical, Disney, and rustic are some excellent bridal shower theme ideas.

Gifts are an essential element of any bridal shower, so the guests should follow specific rules.

Traditionally, the gifts are practical and helpful in marriage, but the bride’s closest family members can gift something profoundly symbolic like a family heirloom.

Some brides have a wedding gift registry to make the gift choice easier for the guests. This registry can also serve as a bridal shower registry.

As with everything involved in the bridal shower, keep the gifts appropriate and distinguish them from bachelorette party gifts. Remember that the gift will most likely be opened in front of everyone.